Published on October 4, 2012 by jeffrey in Reviews

412 King
Southern/Soul: Breakfast, Weekday Lunch, Weekend Brunch, Dinner (except Sundays)
$$$
How to save $: Use a Restaurant.com Gift Card. We did the $25 off $50 for some good savings.

Virginia’s On King, which shares an owner with Coast and Rue de Jean, is the final restaurant of the trifecta that we needed to review. With this task complete, we can say that the guys behind these restaurants are doing something right as all are delicious (but, if forced to rank, Rue de Jean will take the cake 10 times out of 10). 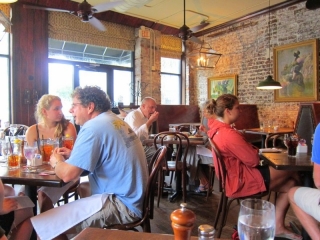 The only one of the three restaurants actually on King Street, it features traditional, southern décor: exposed brick and deep, dark, rich wood booths and tables set the tone for the rustic and very lowcountry feel. The artwork features scenes of the Deep South.

We dove right in to our Sunday brunch with the TRADITIONAL TOMATO PIE ($7.99) with arugula and balsamic vinaigrette. The description fits the bill and stays true to the course for Virginia’s– a very traditional tomato pie, like your grandmother might make. It was very creamy and cheesy in a fresh, flaky crust. My only suggestion to the chef would be adding a few more tomatoes in the future, as it should be the main ingredient. With the healthy portion of arugula salad, it was a good, filling appetizer to split with the table. 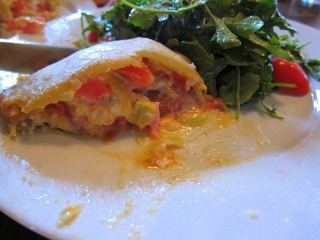 Next up, the BULL’S EYE ($9.99) hit the spot with two pieces of Texas toast, with the center cut out to allow for each to have an egg in the middle. My egg was overcooked and the whole dish was on the bland side, but the sides more than made up for it. The BISCUITS WITH SAUSAGE GRAVY was great, but so heavy you won’t want more than a few bites. I mean, how could you go wrong by soaking a biscuit with a delicious hill-up of sausage gravy? You can’t. The only  “vegetable” on my plate was the COLLARD GREENS. I use the word “vegetable” loosely because they made these things taste so good by stewing fresh collards with apple cider vinegar, a ham bone and maple brown sugar for a long time . The result is a very tasty and tangy dish that likely had all nutritional value stewed right out of it—but definitely worth trying. 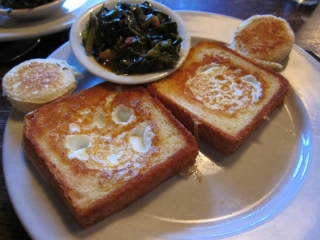 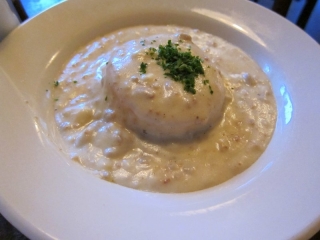 I had a bite of the SHRIMP AND GRITS ($13.99) and it, too, was a great choice with a good flavor of which green and red peppers was predominant. It won’t be in line for any awards, but it was a well-executed version of the classic lowcountry dish. 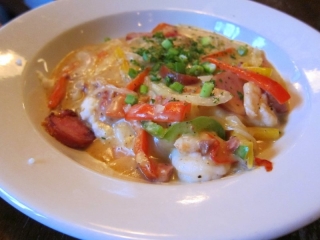 McCown said the TODAY’S OMELETTE ($9.99) was also excellent and cooked much better than my eggs. The variation that day included tomatoes, goat cheese and red and green peppers. The goat cheese really made this dish, and I’d say this was the best choice at our table. 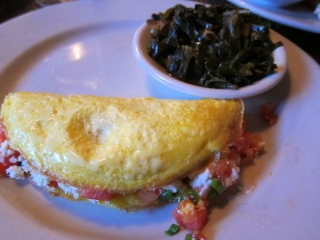 BOTTOM LINE: Virginia’s is a perfectly fine place to go for a traditional, Southern style brunch. It’s not the best on King, but if you’re looking for something safe (think a Mother’s Day or Father’s Day brunch), it’s one of the few that will deliver every time.

Comments Off on Virginia’s on King