Published on September 30, 2012 by jeffrey in Reviews 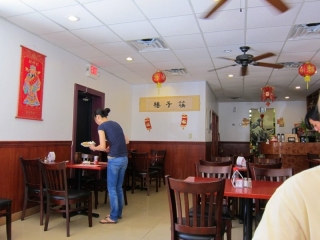 Chopstick House has more than its fair share of good reviews, making me hopeful for a better-than-average Chinese restaurant experience. We gave them a shot at lunch during the week and found the tiny dining room to be about half-full – already better than most take-out-only places. I can’t say the interior was decorated by a “licensed” interior decorator, but it was decent enough and the atmosphere was busy enough that you didn’t feel awkward dining inside.

We expected the menus to be a bit more Westernized (you know, with maybe 10-20 dishes max that they do well). Nope, it was the standard what-felt-like-17 pages of dishes, all of what, at a glance, appeared to be the same five ingredients prepared in hundreds of variations. What is it that the Mexicans and Chinese love about an overly complex numbered menu? Ok, maybe it’s just for convenience and perhaps to minimize pronunciation shyness, but, still, why do you need 100+ options on the menu? You cannot honestly expect me to believe that every single one of those dishes is as equally good as the last; maybe we could compromise with an abridged version of strictly “house specialties?” 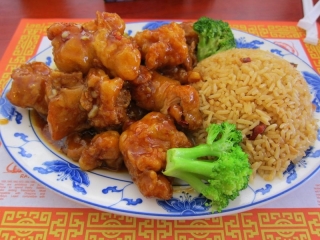 Doing my best to take queues from the server and those around me, I went with the L20: GENERAL TSO’S CHICKEN ($5.80 at lunch) with what was said to be by far the most popular. I found it to be pretty standard for this dish: I believe it’s traditionally spicy, however, this version was very mild for my palette. The true test for Chinese restaurant chicken is to cut into a piece – I usually take an attitude of “if you go looking for a problem, you’re probably going to find one,” and make every effort to eat full pieces so as not to lose my appetite. On my test, I cut into a few and it was indeed a white-looking, chicken-type meat—which is much better than most places, but there still wasn’t anything that gave me the feeling it was fresh or quality meat. The chunks were huge, but, upon closer inspection, the actual amount of chicken in the dish was quite slim, as most of the chunks were a breading that is all mixed in.

At just $5.80 for an entrée, pork fried rice and a drink, this Chopstick House is an undeniably good deal – it does have that going for it (although the lunch menu seems to include the cheaper options from the dinner menu). 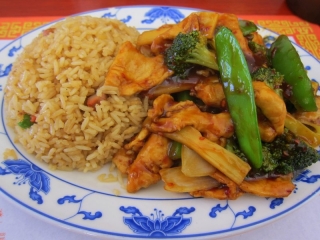 McCown’s L3: SZECHUAN STYLE CHICKEN ($5.80) was better. It left less to the imagination as it featured slices of chicken, which could clearly be confirmed as chicken instead of having its true identity hidden behind the veil of a fried breading. The dish had a lot of veggies, including but not limited to snow peas, water chestnuts, carrots, mushrooms, bell peppers, bamboo shoots, green peppers and broccoli. But, don’t let that fool you, as any flavor and chance at a healthy dish was surely masked by the all-too-salty soy/teriyaki-based sauce that suffocated your taste buds. 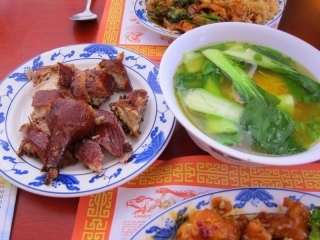 Intent on trying something unique, traditional, or just good at a Chinese restaurant, I also ordered one of the daily specials. Finally a special – that ought to be tasty and fresh, right? Not quite. The DUCK NOODLE SOUP SPECIAL ($8.95) arrived as a bowl of “soup” in the form of noodles in a salty broth so non-tasty it left you yearning for Top Ramen. The meat portion of the dish arrived on another plate featuring a few pieces of duck cut up with more bone, fat and skin on it than edible meat. 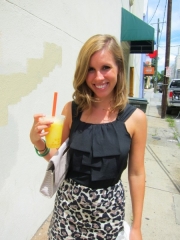 One cool thing that they do have and was better than most anything else—the BUBBLE TEA ($2.50) with mango flavor and “bobo heads,” small mango juice bubbles. It’s the rave in Asia, but weird to us ‘Mericans. In this case, weird and unusual turned out to be refreshingly good.

Maybe Chinese just isn’t my thing. I’ve yet to find one I like. I mean, even after eating at a very expensive, top-of-the-line Chinese place in Hong Kong last year, I still don’t like Chinese. What am I doing wrong?

BOTTOM LINE: I had high hopes, but found Chopstick House not to be anything special, aside from a slightly fancier dining room that doesn’t make you feel like you’re in a sketchy, awkward fast food joint. The food? Your run-of-the-mill Chinese. But, if a cheap, very heavy lunch is your thing (and perhaps you like Chinese food in general more than I do), you’re at the right place.