Published on November 5, 2012 by mccown in Reviews

I love Thai food. And I (used to) love Basil.

But, then I started eating at more authentic Thai restaurants (think: hole-in-the-wall with lots of Buddahs), and realized Basil might be good, but cheap Thai food is better.

Fire may not be decorated with Buddah’s and it serves food other than Thai (which, I’d argue, is a good thing)… but this is the new place to go for Thai food on King Street. The best part? One-third the price of Basil! 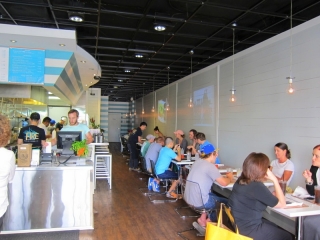 Fire is a relatively new (opening in September) restaurant, taking the place of Burger Babies on Lower King. It has a sister restaurant in Savannah, and I guess it was so successful there that it came to Charleston. The worst part about this new restaurant is the location, which is ironic since Lower King used to be where everything was. Now, you CofCers and Upper King residents will have a little bit further of a walk, but we promise it’s worth it. 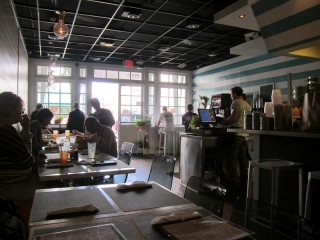 Fire has lots of bright, vivid colors and WAY more energy (and customers) than Burger Babies ever did. Loud music, TVs on the wall, and close-sitting tables make up the busy-feeling atmosphere.

It sells itself as a “street food” restaurant, but one look at the menu gives you plenty of foods – and genres – to choose from. Because we both love Thai food, we went that route, but if Thai’s not your thing, still go to Fire for the sushi, Asian-style salads, skewers, teriyaki and sandwiches – you can find basically anything Asian here. 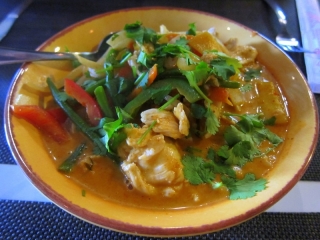 Like always, I went with the GANG DANG GAI (RED CURRY) ($7.95!!) – it is WAY cheaper than Basil & tastes just as great. I will say that this had a little less spice and a lot more coconut milk than its counterpart at Basil, but, hey, for a third of the price, it can’t be beat. It comes in a huge portion, so be ready to take at least half of it home for later. 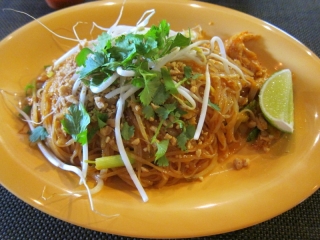 Jeff tried the PAD THAI CHICKEN ($8.95), which was pretty good. The sauce is sweet and rich, but it’s a very good Pad Thai dish. Again, very filling — he took half of his home, too!

All in all, this new restaurant is one to visit again and again. You can visit three times for the same price it costs to eat once at Basil. And that, my friends, is the best part about Fire.

Comments Off on Fire Street Food