Published on August 9, 2012 by jeffrey in Reviews

I try to make it a point to not do too much research on restaurants before we go to them. I kept the same philosophy on our visit to Wentworth Grill–I had heard of it before from Restaurants.com (which is always a slight hint that they’re desperate for business). I had an inclination that it was attached to a hotel, maybe, but other than that I had no idea. 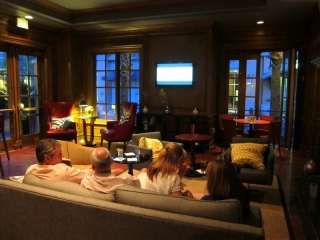 When you enter from Wentworth, there is a semi-separate entrance from the hotel, so we were still pretty in-the-dark about its relationship to any hotel. Straight through the door is a hostess stand with a nice, substantial/formal bar area to the left. So, they do a pretty good job of keeping it feeling like an independent. We had actually made reservations for 8 p.m. on a Friday night, which, given there were only two other tables eating in the large dining room, it turned out to be a nearly laughable move. 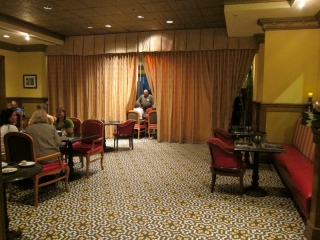 The dining room was way, way, way too bright: we practically had spotlights on our table, completely erasing the chances of creating any ambiance. As soon as I sat down, it felt all-t0o-familiar, I just couldn’t put my finger on it. It felt a little too “institutional,” for lack of a better word… Like the type of meal served at a catered formal event at a country club or hotel. It was all too formal, lacking any authenticity. The lack of people coupled with the loud music trying to set a mood made it feel pretty awkward.

On the next trip over from the waitress, we asked about the hotel. She said it was attached to the Renaissance Marriott–bingo!–it finally all added up: everything felt like the many Marriott formal dinners I have been to at the Spartanburg Marriott in college. When we heard it was connected with a hotel, I just figured it was a smaller independent or boutique hotel with a decent, local restaurant– maybe like the Wentworth Mansion and Circa 1886. With that bit of knowledge, our opinions immediately sank, but we did our best to keep an open mind. I felt duped. 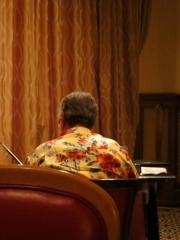 It was at this point that the lights came on, so to speak, as in our eyes were opened (because the damn lights had been on so high all night, I feared I might get a sunburn). As we realized we were in an uber-touristy hotel, we started soaking in our surroundings…Can you say Hawaiian shirts? Because that’s what was being rocked all around Wentworth Grill. I guess adult men, in an effort to feel like they’re on vacation, feel obligated to wear “Hawaiian Shirts” despite being more than 4,000 fricken miles away from Honolulu. I always wondered how Tommy Bahama stays in business. 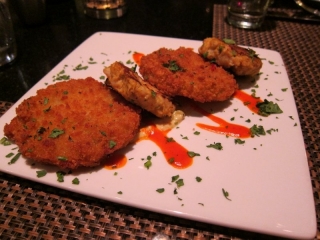 Now, with all of that out of the way, we did eat a meal at the restaurant. We were working with a $100 minimum target, so we started with the CRAB CAKES AND FRIED GREEN TOMATOES ($16). Let me say we were impressed with this one…at first. The presentation was good, the damn remoulade-drizzler was clearly professionally trained. It all tasted pretty good, but when you take into account that the fried green tomato had the thinnest slice of tomato with the bulk being fried breading (around a 1:5 ratio in the exact opposite way you would expect) and that the “crab cakes” were tiny and had slim to no crab meat (because they had switched to shrimp recently), it wasn’t as good as we thought at first bite. Couple that with the ludicrous $16 price tag, and it makes this app pretty damn miserable. 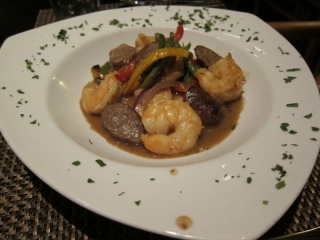 McCown ordered the SHRIMP AND GRITS ($22) which was about as good as the Crab Cakes. It was extremely bland (could that be an oxymoron?), featuring plastic-tasting shrimp which were so obviously straight from the freezer that I welcome the filthy liar of a chef that tells me otherwise. The gravy couldn’t have been more generic, the sausage was anything but “andouille,” as advertised on the menu, as it lacked any spice at all and was overcooked. Last and possibly most important, the grits were said to be white cheddar and assumed to be proper stone ground (I mean, it is a Shrimp and Grits dish being served in Charleston, after all). Well, when at the Marriott Charleston, the only assumption that won’t make an ass out of anyone is that they cut a corner and screwed it up. The fact that they charged $22 for this is insulting and it’s even more insulting that they’re serving it to people visiting Charleston–no wonder people don’t like grits. 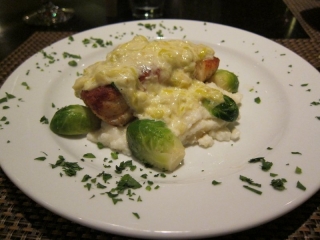 I jumped on the CAST IRON SEARED GROUPER ($25) served with white cheddar grits cake, brussel sprouts & braised leaks. Again, this really wasn’t all that bad. It was a generous portion of fish that tasted great mixed with the white cheddar grits. But then you took a second bite and reminded yourself that you aren’t in Akron, Ohio, you’re in Charleston, South Carolina where they have access to fresh seafood — despite the fact that the Marriott restaurant doesn’t elect to use it. On subsequent bites, I realized how overcooked the fish was — the only saving grace was the creamy, buttery sauce coated on top. 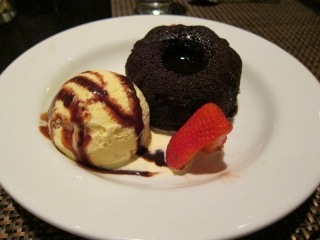 We finished with the MOLTEN CHOCOLATE LAVA CAKE: Pretty generic but delicious. The cake was clearly frozen then recently warmed, but nonetheless deliciously spongy and decadent. To be honest Chili’s does a better, cheaper job.

BOTTOM LINE: Please, please, please do yourself a giant Charleston-favor and SKIP THIS RESTAURANT. There are so many good choices right around the corner. But seriously, I liked this place about as much as Simon Birch likes buses. 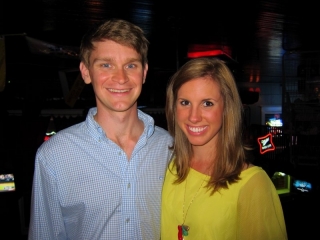