Ohhh herro… (is it more or less racist since that is a Chinese impression and this is for a Thai restaurant? THINK ABOUT IT.)

But apparently, lots of other King Street-ers have found it, too, given the long waits. It has been rated the #1 Restaurant in Charleston on Urbanspoon for some time now (still holding 87% with over 1,300+ ratings!). Paired with no reservations or call-ahead, this makes for a restaurant you can only visit if you don’t have any plans for a few hours. 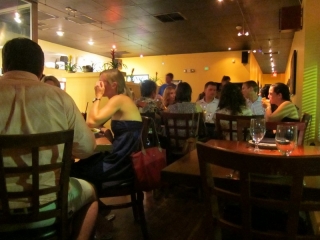 While we waited, we sat at the bar and checked out the cocktail list. It looks like a pretty decent list of cocktails, but I’d suggest skipping them for the Singha beer for $3.50. It’s a steal compared to the $9 or $10 cocktails, which are mediocre, at best. But, if you’re really in the mood for a cocktail, I tried the THAI BOXER ($9), which was heavily flavored with vanilla vodka. Good, but not $9 worth. 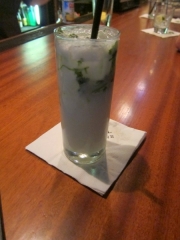 We ended up splitting two apps and an entree and walking away very full. First up, we tried the CHICKEN LARB ($6.95), a traditional Thai dish with minced chicken, ground rice, onions, mint, scallions, cilantro, chili powder, fish sauce and lemon juice. It was a little spicier than expected, but nothing compared to the spice level of other Thai dishes. Dense, salty and fishy from the fish sauce, it was surely more filling than a normal appetizer. Basil was the predominant flavor, and we would rather have tasted more mint and cilantro, as typical in larb dishes. It was a relatively small portion, but, then again, it is an appetizer. 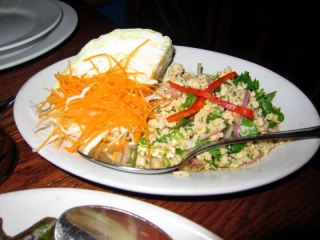 The SOM TOM SALAD ($8.95) is our go-to. Listed under the salads, if you’re expecting a bed of lettuce, you’ll be disappointed. That disappointment won’t last long, though, because this is freakin’ de-ricious. Shredded green papayas are mixed with tomatoes, garlic, Thai chilies, palm sugar, fish sauce and lime juice, then tossed with boiled shrimp and crushed peanuts. It’s crisp and refreshing, but watch out: this dish is SPICY. Like, makes-you-sweat-little-beads-out-of-every-pore-on-your-face spicy. And, did we mention it’s the best thing they have? It’s like nothing you’ve ever tasted. A must-try. 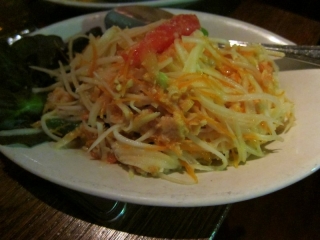 Our go-to entree is the RED CURRY ($15.50), which comes with either chicken, beef or tofu (or shrimp for $2 more). We’ve tried it with both chicken and beef (I prefer the chicken, Jeffrey prefers the beef) – but this time we went with the beef because of the chicken larb. Either way, the flavor is savory, smooth and surprising. Bell peppers (red and green) are mixed with bamboo shoots and basil, but the sauce is creamy and rich from the coconut milk. It comes out in a covered bowl, along with another bowl full of white sticky rice. This dish is also pretty spicy, but nothing compared to the Som Tom. We’re not sure if it’s got a hint of nutmeg in it, but one thing’s for sure: It’s another one of our go-to’s at any Thai restaurant – but it’s nearly unbeatable at Basil.

I think the main reason this place ranks so highly among Charlestonians is because, unlike the majority of Thai restaurants, this one’s got a good atmosphere. Usually, a good Thai restaurant makes for awkward decor, uncomfortable seating and (the worst part), the restaurant owner staring at you from his perch at the register, making sure you like every. single. bite. With Basil, the restaurant is crowded, perhaps more tastefully decorated, and is a bit more upscale than others. Couple this with fresh ingredients and piping hot dishes (they bring them out one-by-one, not waiting until all of the table’s dishes are ready), and you’ve got people waiting in the street for a table. 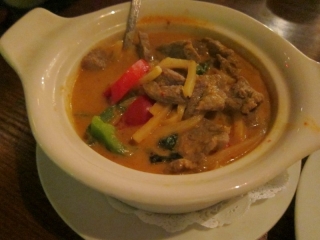 BOTTOM LINE: Basil is, hands down, my very favorite restaurant in town. It’s so good, it makes me want to get a face tattoo like the boys of Hangover II. Sure, other Charleston restaurants might be more pretentious and get more magazine-cred, but this Thai cuisine is so tasty (and spicy), it doesn’t need magazine articles to prompt the long lines and wait times.