Published on August 7, 2012 by mccown in Reviews

If you haven’t heard of Butcher and Bee, you’ve surely been living under a rock. 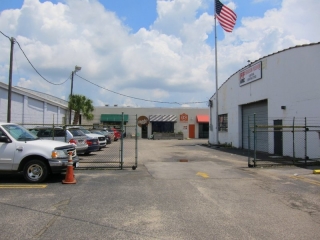 Opening in October 2011, the relatively new restaurant on Upper King has made a name for itself quickly — even the New York Times has encourages its readers to try out the sandwich shop on a weekend get-away to the Holy City.

Despite being located on King Street, you’ll have to plan to go there because you won’t just walk by. It’s on upper-Upper King, as in: north of Hwy 17. AKA: in the hood. Past Barsa. With that said, it’s worth the walk (and drive, if you’re going after dark). 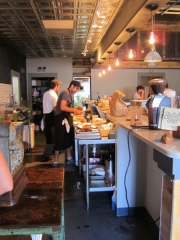 We went for lunch on a weekday and the place had a pretty good crowd at around 11:30 a.m. And, would you believe that every single bro in the place had a mustache or beard? (And not your 1980s-protagonist-alpha-male-Tom-Selleck-style moustache, more of your typical douche-stache that hipsters are so well known for). Men wearing Toms, goatees and skinny jeans abounded in the small, eclectically decorated restaurant, a real hipster-hang out. Not that that’s necessarily a bad thing: they know good food. 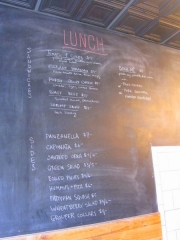 “The Bee” posts its ever-changing daily menu on Facebook and Twitter daily, so make sure to follow it at @butcherandbee to see what it’s serving up. Typically, it has 4-5 sandwiches to choose from, and on the day we went, it was also serving bahn mi (full description of a bahn mi is found on our CO-Restaurant review). I went with the SHRIMP SALAD SANDWICH ($12) and Jeffrey chose the BAHN MI ($11) with pork shoulder. We shared a side of SAUTEED OKRA ($6). Given that sides are extra (roughly $4-9 a piece), this semi-cheap lunch spot can quickly turn into a pretty pricy lunch break.

But, like true hipsters, the irony here is that it’s overcharging for simple sandwiches- and people are still filing through the door in droves. 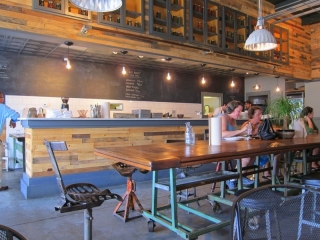 The atmosphere is rustic and very eclectic: there’s not one table like another in the whole place and it looks like benches and chairs were just picked up at thrift stores — but it all ends up looking put together in the end. The ceilings are high and there’s plenty of silverware and cups stocked on the shelves, but the real focus is on the locally produced vegetables being sold by the dish or by the pound to take home and cook yourself. 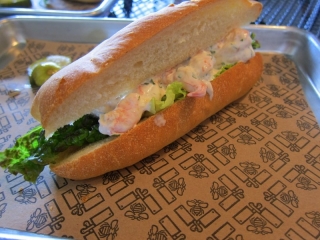 We didn’t have to wait long on our food. The sandwiches both came out on a loaf of French bread, so I ended up taking the top piece of my bread off. Since there were only about 6 shrimp on my sandwich, I didn’t want to run the risk of missing the shrimp because I could only taste bread. The shrimp salad was pretty typical: fresh-tasting and mixed with herbs and a mayo-based sauce, but none-the-less pretty tasty. It was good, but at $12, I’m not sure it was worth the price. 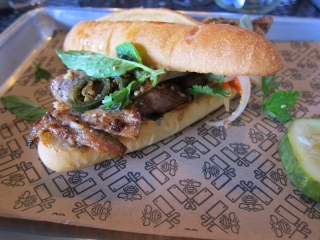 Jeffrey’s bahn mi fit the bill for an $11 price tag: pork shoulder, pickled vegetables (including jalapeños), peanuts and fish sauce; it was packed with flavors and lots of spice. The fresh, whole mint leaves really make it outstanding, and, if I could do it again, I think I would have ordered the bahn mi, too.

BOTTOM LINE:  The food is straight from the farm and you can tell by its fresh taste, so I’d say it’s worth the extra dollars. But the best part about this up-and-coming restaurant? It’s the only BYOB restaurant on the peninsula. And we say you can’t beat that.