Published on February 22, 2012 by mccown in Reviews

39 John Street
Dinner, $$$
Seafood
How to save some money: Costco often sells $100 Giftcards for $80 that can be used here or at any sister restaurants. Or, go with your parents–that’s what we did!

Have a hankering for some seafood? Look no further than Coast. You might have to look hard, though, because you won’t stumble across it accidentally. It’s hidden down an alley behind Rue de Jean on John Street.

But once you find it, I don’t think you’ll forget where it is. It’s not only close to Rue de Jean in proximity, but it’s also owned by the same restauranteurs. And although it’s not the same type of food, we think it’s equally delicious!

First comes the bread, but my suggestion is to skip this course to save some room for the apps and entrées. 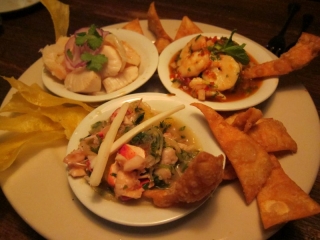 We started with the CEVICHE TRIO ($15.99). Ceviche is most popular in Central and South America. We tried it in Costa Rica and have been hooked ever since. It’s typically made from raw seafood mixed with citrus juices and seasonings such as chilli peppers or cilantro. We chose the TRADITIONAL CEVICHE which featured shrimp, raw scallops, red onion and–according to the menu–lime, chile and cilantro but I didn’t taste any of those flavors. In fact, this was our least favorite of the three, maybe the kitchen just forgot to add the sauce? Second best was the SPICY THAI SHRIMP CEVICHE— I would put this on the upper-end of my spice tolerance but it wasn’t at all unbearable. I would suggest saving a few pieces of bread or a few of the wonton chips to cleanse your palate as the heat intensifies in the aftertaste. The sauce was pretty tasty– I would definitely get this again. Ultimately, the unanimous winner of the trio was the LOBSTER CEVICHE. The cold refreshing sauce featuring lime, orange segments, hearts of palms, cilantro, arugula and chile oil was the perfect match for some fresh lobster.

If you’ve never tried ceviche and don’t want to order the entire trio, I’d recommend ordering only the lobster ceviche. I don’t think you’ll be disappointed. 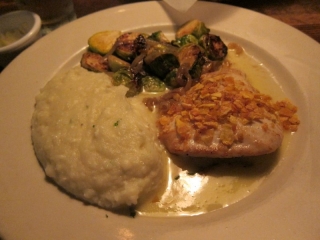 For one entrée, we went with the PLANTAIN ENCRUSTED MAHI-MAHI ($22.99) cooked in a sweet basil butter sauce. Overall it was pretty good — nothing spectacular — but I can’t say that I would get it again. It was served with blue cheese mashed potatoes and grilled brussel sprouts. If you bring along a guest that isn’t so adventurous with seafood, I’d say this is an option that a pickier eater might enjoy. 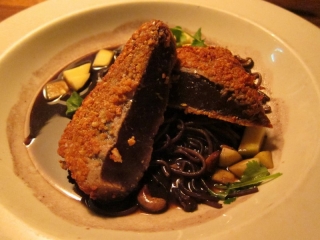 The SEARED RARE TUNA ($24.99) was dusted with cashews and peanuts. It was served over a bed of soba noodles that were black from soaking up all of the pomegranate soy reduction. Make sure you haven’t hit your sodium intake for the day, because this dish will surely put you over the top. But, that’s my only complaint because this fish was delicious. Pretty filling, too; I took more than half of my entrée home for another day. 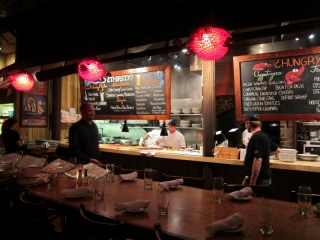 The ambiance, you ask? Unique space with super tall ceilings. We think it must have been a warehouse in its former life. The décor looks like it was pulled from an old fish market. A fun, by the sea vibe that can only improve if you sit outside during the warmer months.

For dessert, we stopped down the street for some gelato at Paulo’s, but we’ll save that review for another post. Here’s a hint: buonissimo!

Comments Off on Coast