98 Broad
French
$$-Mid
How to save $: Specials are offered each night (Thursdays are Fondue Night)

Craving some French food but not craving the prices of La Fourchette or even 39 Rue de Jean? Look no further than Broad St. (right off of King).

This hole-in-the-wall restaurant isn’t too hard to miss, what with all the blue and red French flag decoration on the sidewalk. Commonly known as Fast and French, don’t walk past it just because it’s real name is Gaulart and Maliclet. Tricky.

The best time to go is on Thursday night because that’s fondue night – a pretty good deal if you get the special because it’s fondue, soup or salad and house wine for $15. 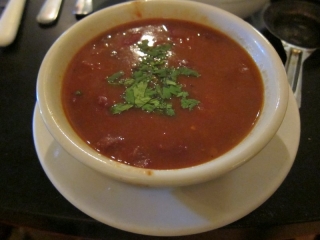 Jeffrey ordered the special with steak fondue, the house red, and the CHORIZO AND RED BEAN SOUP. The soup was delicious and the chorizo was pretty spicy. Very simple and not too salty at all (the mark of a good homemade soup). The only thing that could make this soup better? Colder temperatures outside. 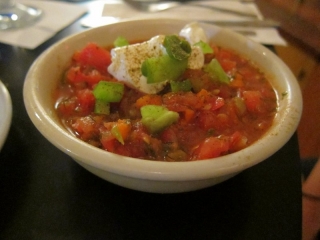 I tried the GAZPACHO (comes with an entree), one of the cold soup options. I know, weird, right: gazpacho in a French restaurant? This is typically a Spanish dish, but, this time, the French did it well. It was GREAT. Very chunky: almost a salsa consistency rather than soupy. Great for a hot, summer day and you can tell it’s homemade. The spices and tomato really made it flavorful, and I found myself eating every single bite, even if I knew I wouldn’t have room for all of my next course. It was that good.

This restaurant is real big on the soups: they make at least three cold and three hot every day, even in the summer. With lots of vegetarian options, there’s surely a soup every diner will like.

Speaking of vegetarian, Fast & French offers “vegetarian escargot” – I’d like to see how that’s even possible. 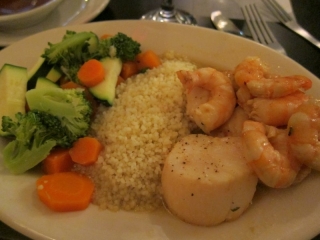 Instead of getting two fondue dishes, I tried the SEAFOOD WASABI ($14), which combined tilapia, shrimp and two giant scallops, all served on couscous and covered in a flavorful wasabi broth, which soaked through the couscous. You better like wasabi, but, if you do, this dish is delicious. It’s a whole new take on wasabi, something I’ve only ever tasted on sushi and almonds. It was a surprising flavor (especially when mixed with the couscous) but very good. 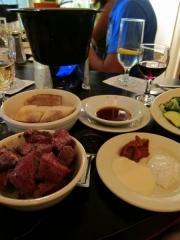 For Jeffrey’s fondue dish, the waitress brought out the fondue pot a little while before the entrees actually came out. She lit the pot so the water inside would begin to boil so we wouldn’t have to wait once our entrees arrived. The BEEF FONDUE was just chunks of raw beef (maybe a sirloin?) chopped up with some cracked pepper. If you’ve never fondued before, you just stick each piece of beef into the boiling water and let it sit there a few minutes til it’s cooked to the temperature of your liking. Beware: it’s going to take a few minutes to cook each piece — and it took us a while to remember to stick the next piece in the boiling water immediately so you wouldn’t have to wait 5 minutes between bites.

The flavor comes from the sauces you dip the beef in after cooking. The waitress brought out a choice of four sauces, but we recommend asking for some standard Dijon mustard. She’ll bring out three different kinds of Dijon, and we thought the tarragon Dijon was the very best dipping sauce. 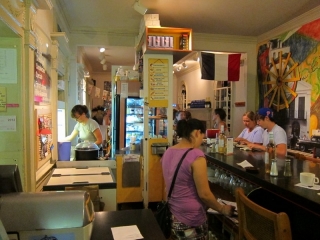 The other sauces were a Horiza (sp?–no idea where to start on that spelling), a red sauce that’s a tomato & jalapeno blend and pretty pasty and thick. By far the best of the four original sauces. The Ponzu sauce is like soy sauce, but sweetened. That was our least favorite. Pretty run-of-the-mill. The garlic aioli sauce is made with sour cream, and probably best complements the meat. The garlic flavor is good, but we just couldn’t get enough of that spicy tarragon Dijon that makes your nose tingle with spice. And finally, the white mustard sauce isn’t too good, especially when compared to the other mustards they’ll bring out for you if you ask.

BOTTOM LINE: This fun, quirky French place makes you feel like you’re in Europe, what with the community tables and red and blue flags everywhere (plus a really good house wine). The good news? Your fellow diners won’t smell like Europeans (we hope). We think it’s a steal for some good French food, especially on a Thursday.

Comments Off on Fast and French