Published on August 24, 2012 by jeffrey in Reviews

King Street Grille touts itself as an “upscale sports bar,” which appears to be a very recent rebranding. They’ve attempted to “class up” the menu a lot: they’ve added a crown beside each and every one of the “The King’s Recommendations,” removed the beer list altogether (apparently Royalty drinks a red or white wine from their extensive menu that did make the cut). I guess that’s what separates the grills from the Grilles. 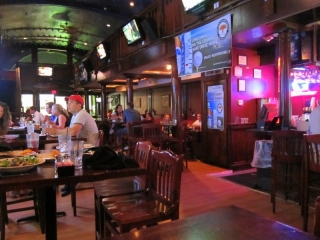 From a quick glance at their website, it would seem that this is a perfect place to “bro out,” as evidenced from their MMA After Party photo album (which only bros watch). If you regularly rock a flat-brim fitted hat (complete with original sticker, no doubt) then King Street Grille is likely the place for you. Other notable events include the “2012 BIKE NIGHT” Series at the Northwoods Mall Location (that’s in North Charleston for all you cultured readers). Not sure what that entails, but it sounds like the type of event that is best left in Myrtle Beach. Either way, I’ve never heard of an “upscale” sports bar hosting a BIKE NIGHT. Good try, KSG, good try. 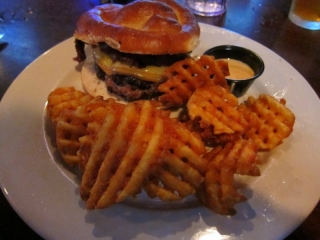 That being said, the food, service and atmosphere were all good on our visit–and the place was packed at 9 p.m. on Sunday night. I had the SANTE FE BURGER ($10.99) sporting Ancho Chilies, Cracked Black Pepper (what a fancy addition), Smoked Gouda Cheese and Bacon, with Chipotle mayo on the side. It was served on a Pretzel bun which was different but not bad at all– a welcome change. All burgers & sandwiches are served with some SEASONED WAFFLE FRIES that I found to be excellent. Think Chick-fil-A but crispier and more flavorful–without the side of political agenda. Although the burger was good, it was also unnecessarily salty and greasy– but maybe that’s what gave it any flavor at all? I’ve had better burgers, but for a place serving up bar/pub food (self-claimed upscale or not) it was decent and hit the spot. 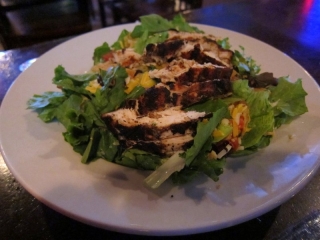 McCown’s CREATE YOUR OWN CHOPPED SALAD ($7.99) started off like any other make-your-own salad: a total pain in the ass. Please just choose for me! You are chefs, are you not? Why am I the one picking what goes well together? If I wanted a salad bar, I’ve heard that CiCi’s offers one for $3.99 that also comes with UNLIMITED PIZZA, so your $7.99 isn’t sounding quite so appealing. You can pick 5 toppings (extras will be $0.50 each) and and add any meat you could dream of for another upcharge (between $2.99 and $6.99). After much deliberation, she topped hers with mixed greens, black beans, mixed cheese, roasted corn, salsa fresca, blackened chicken and corn tortilla chips. The result was overwhelmingly positive. It ended up being a huge portion with enough to take home.

BOTTOM LINE: King Street Grille serves up decent food at decent prices, with an upscale attitude. If you’re looking for a wide open, expansive bar with tons of TVs to watch “the game” you’ve come to a place that will get the job done–just do yourselves a favor and skip the social events, d-baggery can be contagious.

Comments Off on King Street Grille