Published on February 28, 2012 by jeffrey in Reviews

354 King Street
Mexican
$$
How to save some cash:  We used a $6 off coupon found in a free coupon book floating around the CofC campus

“You’ve got to try this Mexican restaurant– this one isn’t like all the other ones,” they said.

Well, they’re all filthy liars. I’m starting to think I have a prejudice towards Mexican restaurants (none at all, though, against our neighbors to the south) because every time I hear the above phrase from a friend I normally dismiss it immediately. 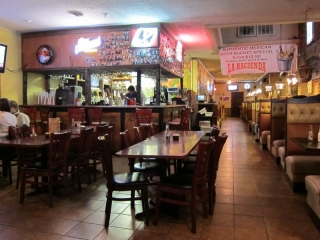 On the way to La Hacienda with a group of friends that were visiting from out of town, I found myself already bashing the Charleston-based Mexican chain, but decided that I would give it a full chance. We went into the main dining room during the  dinner hour on a Sunday night to find large tables of College of Charleston students tipping back pitchers like the prohibition was starting soon (but hey, Monday morning classes are meant to be skipped anyway). With a tiki bar of sorts in the corner, the atmosphere was nice and I already felt like this would be the experience to change my impression of American Mexican forever. 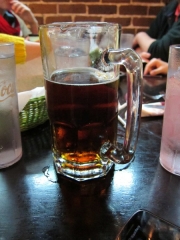 We of course didn’t need the menu for our first course, the Mexican staple of the Dos Equis large beer (32oz of deliciousness for a rather modest $6). The ladies, of course, had a fish-bowl worth of margarita (not so important: our Whole Foods-organic-loving friend from the big city of Atlanta was disappointed to discover that our server had no idea if their margarita mix was made with pure agave nectar or not).

The menu looked as if it had been recently updated and was in full color, with over 10 pages worth of pictures of their featured dishes which, I will admit, all sounded delicious. They, of course, had the required page of order-by-number dishes with the standard re-fried beans, rice and cheese dip. Again, the bar kept getting set higher and higher as I felt we had finally found the truly different Mexican restaurant. 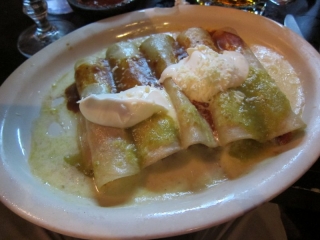 I ordered with my eyes and picked the ENCHILADAS BANDERAS, filled with ground beef and topped with three different sauces arranged in a fashion to look like the Mexican flag. Upon my first bite, all of those aspirations for La Hacienda came crashing down harder and faster than Lindsey Lohan’s career. Either the cooks have never seen the menu picture they should be trying to replicate or they have recently hired Stevie Wonder because my plate looked absolutely nothing like what was advertised (here’s what they were going for). The sauces were gross and beyond a doubt straight from a can. Overall, the dish was hardly edible. 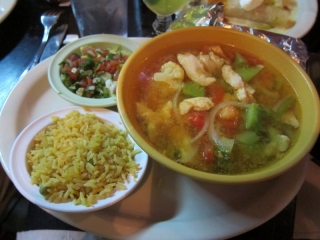 McCown had the CHICKEN SOUP which was also mediocre at best. The broth was essentially flavorless and was filled with equally tasteless chicken, pieces of broccoli (why?) and avocado.

While I realize we might have ordered unorthodox items from the Mexican restaurant, I made sure to have a bite off of a friend’s plate to find the “steak” extra chewy and really a terrible piece of meat. Of course, there was no shortage of canned re-fried beans and super-dry rice. 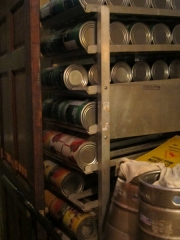 So, back to the same question that has been plaguing me: am I prejudice against Mexican food or do all Mexican restaurant really suck that much? Is there a holy grail of Mexican restaurants that prepare food using fresh ingredients and that don’t top everything with generic white cheese?

Bottom line: If you’re looking for a nice, filling meal, head on down to La Hacienda. But be sure to skip the food and order two large Dos Equis—it’s the best thing on the menu.