Ahh brunch, the best meal of the week, where drinking before noon is not only accepted but also encouraged. 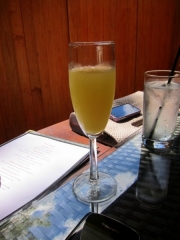 We stumbled across Mercury Bar a few months ago (before the inception of our famous blog) and were lured in by “ULTIMATE MIMOSAS” being pedaled at the door (turns out “Ultimate” means bottomless, but word on the street is that establishments are no longer allowed to serve alcohol with free refills on the peninsula– hence the marketing trick). For about $10, you’ll be served mimosas until 3pm or until you feel as though you’ve had your monthly allowance of Vitamin C. Unlike some establishments, the guys at Mercury don’t skimp on the quality either. You’ll feel like a Spanish King while sipping Frexinet Cava Brut mixed with the freshest Florida’s Natural.

As a parting gift to encourage our return, our server gave us a few free drink tickets for a future brunch. I can safely say that our second visit was just as good as the first. Feeling confident that I could ward off scurvy for many months to come after the first go-round, we went for the BLOODY MARY ($6-8?) this time. I’m new to Bloody Marys and this is actually the first one that I’ve ordered to myself. The one at Mercury made me a believer. Garnished with a lemon, lime and green olive, it had a good spice flavor with just the right amount of kick.

I better go ahead and get this out of the way–don’t be dissuaded by the lowly lit, cavernous-feeling main bar when passing by– all of the action during brunch is out on the back porch. They have seating for about 30 to 40 and it appears to fill up fast, so it’s best get there earlier to make sure you have seat. Also, don’t be surprised if you see servers running next door to O’Malley’s frequently: they’re both owned by the same group. 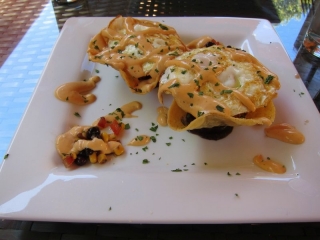 Now, on to the food. First up: the HUEVOS RANCHEROS ($9). Served on a mammoth plate, your first impression will surely be that you were shorted on portion size, but it turned out to be a perfect amount of food. In their rendition, they take 2 large tortilla chip shells, fill them with a black beans and corn mix, top them with eggs over easy and drizzle some delicious chipotle sour cream over everything. All in all I would (and did) get this dish again. The chipotle sour cream brought it all together. Only complaint is that the black bean and corn mixture was cold– would have been better if all was served hot. 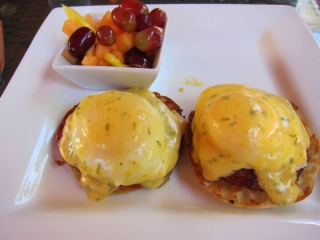 McCown ordered the EGGS BENEDICT ($10), there’s only so much you can write about an Eggs Benedict dish. Let’s see, every self-respecting brunch place has it and it generally tastes the same everywhere. I will say that the one we tried was perfect. It was hot all the way through (a pleasant contrast to the Huevos Rancheos) and again, a serving size that wasn’t overfilling. The one thing they did a little different was use Canadian bacon which, while pretty salty, wasn’t as salty as the more common country ham.

So, while the weather is warm, head on out to the patio and at least try the brunch at Mercury. You likely won’t be disappointed. Just remember, if you come starving, you better order an appetizer or plan on drinking your calories for the day since the entree won’t fill you up.

Comments Off on Mercury Bar