We wanted to go to a fun, fancy restaurant to celebrate. My only requirements: I wanted to sit outside. And go to a place neither of us had been before.

I asked around for some opinions and Jeff did a little more thorough and unbiased research (looking at online reviews from strangers), and we finally decided on 82 Queen. Jeff was a little hesitant and told me (after we made reservations) that this place was known for being touristy. And we’re known for not liking touristy places. So, without exagerating for dramatics, my high expectations crumbled before we even walked in. 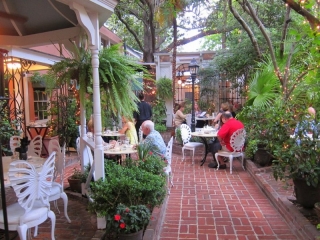 Guests enter the restaurant along a brick alleyway, and most of the seating (I’d say 90 percent) is outside. The big, outdoor patio is so beautiful, and perfectly Charleston. Since we’d never been there before, we were seated in the “Greenhouse,” which is a little covered area towards the back of the restaurant. The tables and chairs are white metal, and, coupled with the pink stucco building behind us, I sort of had the feeling that Alice in Wonderland might be joining us for tea later — in a good way. 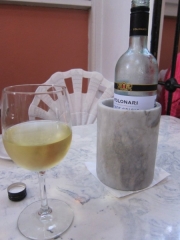 We started off with a bottle of pinot griggio from Folonari, Italy. The waiter told us it was the most popular wine on the menu, and I can see why. 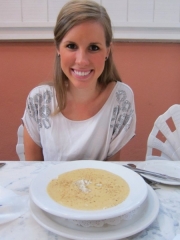 For appetizers, the waiter suggested the AWARD WINNING SHE CRAB SOUP ($7 for bowl) (Best in Charleston for 10 years running…) and, his favorite, the SOUTHERN FRIED GREEN TOMATOES ($8). Once again, the waiter didn’t disappoint.

Though I’m not usually a big fan of seafood soups of any kind, I have to say the the she crab soup really was pretty good. It was super rich and creamy, with a subtle spice that made me keep going back for more. Ingredients were lump blue crab meat, crab roe, flour, celery and finished off with a topping of sherry. I’d definitely recommend it — and I usually steer clear. 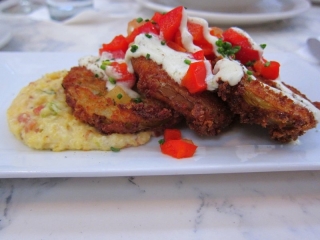 Much more my usual style, the fried green tomatoes tasted exactly like I thought they should, with the added bonus of a sweet red bell pepper relish and Boursin aioli as toppings and cheesy bacon grits underneath. Sort of like an extra surprise. If you’re visiting Charleston, or just looking for an old Southern favorite, I’d definitely try the fried green tomatoes on your visit to 82 Queen. And, you must visit 82 Queen. 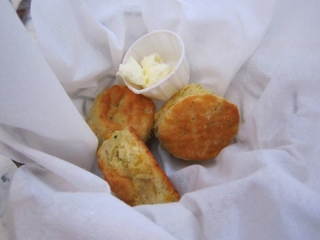 And the bread! At most restaurants, I avoid eating the bread because past experiences have taught me that my lack of self-control causes me to be full from the bread before the appetizers even arrive, so, over the years, I’ve taught myself to patiently wait for the “real food.” But, not this time. I’m glad my lack of self-control kicked in because these cheesy garlic biscuits were a-mazing. I mean, if they’d put 12 in the basket, I could have eaten them all. They were soft and just-past gooey. Moist and not the least bit flaky. Think Red Lobster cheddar biscuits but even better. The best part? When you try them, you don’t have to actually be eating at Red Lobster. 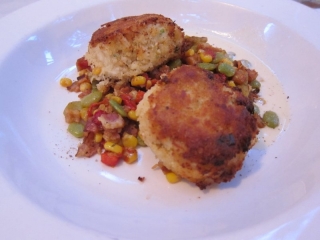 As for our entrées, Jeff had the LUMP CRAB CAKES ($27), served with hashatash – a mix between hash and succotash, with a Tabasco Beurre Blanc sauce. The best part was clearly the hasatash. Who knew vegetables could taste so good? It was a mix of corn, butterbeans and bacon. The salty bacon pulled it all together and made this crab cake dish an above-average crab cake dish. The waiter said their crab cakes were 95 percent crab, which apparently is a much higher percentage than the crab cakes most other restaurants are hustlin’. 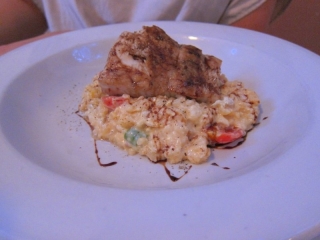 I had the Catch of the Day, which was a PAN SEARED MAHI-MAHI ($27) (my favorite!), served over a crab risotto with tomatoes and asparagus. We argued over who ordered the better entrée, and, while we continue to disagree, I vote for mine. The fish was nice and meaty and tasted pretty bare by itself, with little to no seasoning. But, coupled with the creamy crab risotto and the crunchy asparagus, it was sooooo good!!! And, if you love tomatoes as much as I do, these sliced grape tomatoes were the perfect compliment to an already-tasty seafood dish. And, since you can’t order this exact dish on another night (it was the special), I’d recommend the SIMPLY GRILLED LOCAL CATCH ($27), which is served over a goat cheese and peach salad. That was a very close runner-up choice.

And, I’ve saved the best news for last. Even though we weren’t in any hurry, the waiter kept apologizing for the extra time it was taking for our entrées to be served. To be honest, I didn’t even notice, but he was so apologetic and the manager even came over to apologize and welcome us to the restaurant. It was a refreshing change that doesn’t happen very much any more, but was much appreciated. In fact, they even offered us free dessert (!!!) to say sorry for the wait. As an aside, Lil’ Wayne never offered me free dessert when he released his album on August 29 last year (if you didn’t get that reference, you’re probably too old to be reading this blog). We chose the SEASONALLY INSPIRED CREME BRULEE ($7) and the PEACH COBBLER ($6), again going along with the recommendations of our waiter. The manager personally delivered the desserts to our table and apologized profusely. Great service.

For our visit, the “seasonal inspiration” for the  crème brulèe was banana pudding, so the custard was baked with a few slices of banana and topped with some Vanilla Wafers. It was much thicker and deeper than any traditional crème brulèe, but still tasted pretty good. It was more of a bananas foster-meets-banana pudding than a crème brulèe. 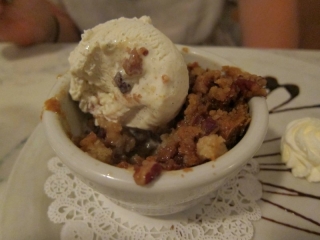 The peach cobbler was served with Wholly Cow ice cream and baked with walnuts. Sweet and delicious. Probably better than the crème brulèe.

All-in-all, our experience was unusually pleasant. 82 Queen is the perfect choice for a celebratory meal, a fancy excursion or a true taste of Charleston cuisine and atmosphere. My suggestion is to go in the springtime, so you can enjoy the outdoor patio before the weather gets too muggy.

Be sure to let us know if you’ve tried 82 Queen, and how your experience compares to ours! 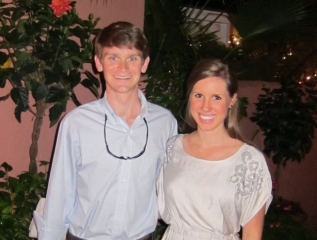