It is obviously no secret that O-Ku has great happy hour specials–on our visit Friday evening, the place nearly had a line out of the door. 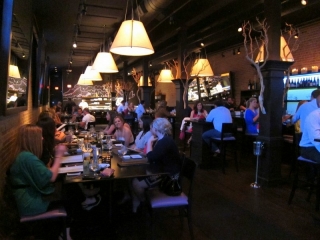 The restaurant, which is owned by the same group as Oak, The Macintosh, The Cocktail Club etc… is about to celebrate its 2 year anniversary on King Street, and there is no doubt that it has weathered the new-restaurant-hype stage and is slowing maturing into a Upper King staple.

I would suggest calling ahead if you’re trying to take advantage of one of their very popular Happy Hours nights (Mon., Wed., Fri.). The crowds come for the half-priced sushi rolls (just the “standard rolls” — a relative term because they are like the specialty rolls at any other place) and discounted drinks ($3 off cocktails and half-priced sake). 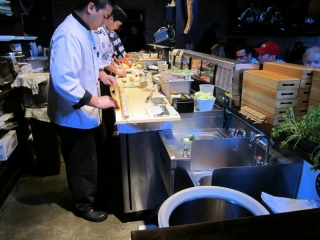 I will say that I was shocked at how big the crowd was at 6 p.m. on a Friday; the four sushi chefs were working at full steam just trying to keep up. The whole dining experience was quite lengthy, which we were fine with — but, take this into consideration if you have post-dinner plans. 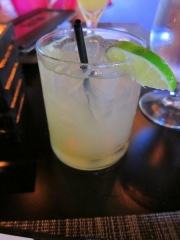 We dove right into the discount cocktails, McCown tried the OKU-LA-LA ($10) featuring blood-orangecello, raspberries and prosecco. I thought it was good, but probably not worth getting again. It is essentially a more stout mimosa. The blood-orange and raspberry flavors weren’t all that strong. I asked the waiter to bring me one that wasn’t too sweet. He said he had just the thing but it was a little spicy–sounds perfect. The GINGER’S AFTERGLOW ($9), despite all of his hype, was essentially a margarita (Milagro silver tequila, lime and ginger agave) and way too sweet in my opinion. And the bartender must have left out the Thai chili pepper by mistake. 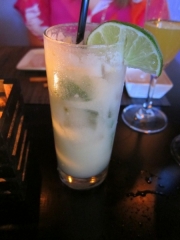 Given that it was happy hour, we took a page out of Jim Morrison’s (or Amy Winehouse’s?) book and had “just one more.” This go-round, I steered clear of the cocktails (it might be any oxymoron to say “not very sweet cocktail”) and tried the Sake. This time the waiter’s recommendation turned out to be spot-on, as the TOZAI “SNOW MAIDEN” ($10.5/glass) was perfect. My previous experiences with sake have always been the piping hot stuff that tastes a bit like rubbing alcohol but has been masked with sour apple flavoring; this sake was nothing like that. Served cold (the traditional way), the unfiltered sake had the appearance of being thick and milky, but turned out to be a very light, cold and refreshing drink with a hint of lemon. Despite the good sake experience, McCown’s JASMINE ANGEL ($10) definitely won the best drink award. The 2011 award-winning “Asian mojito” is made with Bacardi Silver, Thai chili pepper, lemon & lime juice, lemongrass, ginger, coconut milk and fresh mint. This was so much better than the Ginger’s Afterglow: it wasn’t too sweet and had a nice spice to it, complements of the Thai chili pepper and ginger. 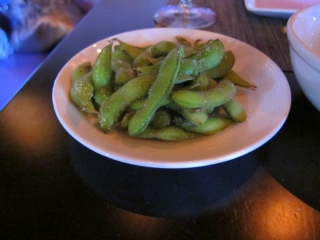 While we were waiting for our meal, the sever sent us over complimentary EDAMAME ($5, free to us) to apologize for the wait. Nothing too special here but it did hit the spot. 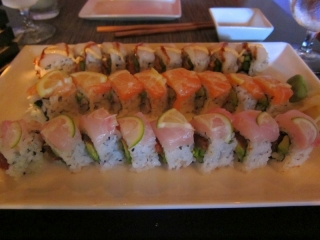 The first roll (out of three) was the WHITE DRAGON ROLL $(12). Our waiter’s suggestions, this roll had a mix of spicy seafood, escolar, spicy aioli, eel sauce and, most unusual, asparagus. All-in-all, it was good but the asparagus killed it for me– the crunchy stalk vegetable took away from the other flavors too much. Everything else about it was delicious, though; the escolar was a perfect slice of fish: very buttery in taste because, according to the sever, it swims in cold water so has lots of fat. Next up was the SALMON AND LEMON WRAPPED ROLL ($12). It is rolled crab salad and avocado topped with a nice hunk of salmon and very thinly sliced lemon (rind and all). The salmon and lemon roll was McCown’s favorite, but I’d say the best sushi was the SWORDFISH AND LIME WRAPPED ROLL ($13). This roll had spicy tuna with a large piece of swordfish served on top and garnished with a lime. Pretty similar to the salmon and lemon roll, but with more spice and added flavor.

Bottom line: Sushi so good even the guys on Pearl Harbor might eat it. This happy hour is too good to miss. Make sure you go on a M/W/F (we tried a Thursday and it’s dead without the happy hour specials). Have a drink and roll, and make sure you tell us about your experience.