As extensive and self-proclaimed “world travelers,” we were very interested in extending our wide variety of international culinary insight on the local Spanish-inspired tapas restaurant, Barsa.

You’ll want to know up front that Barsa is so far on upper King that you’ll feel as if you could be shanked by a homemade bottle knife at any moment outside of the restaurant–you up in da hood now. Don’t be alarmed, though– we made it out unscathed and didn’t see a single body bag on our venture. 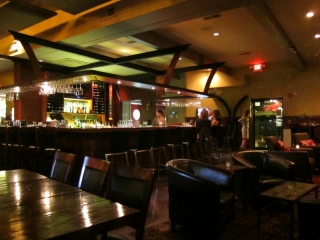 You enter the very nicely renovated building through the back, beer-garden-style patio that was lively on our Friday night visit around 10pm. The inside dining area is L-shaped, with the shorter side being a comfortable lounge area with plush leather chairs and a good bit of breathing room. This opens to the larger table dining section of the restaurant with giant paintings of all things Spanish (bull-fighting, flamenco, rampant unemployment–or are corny financial crisis jokes not in right now?). It was just what we were looking for: late-night dining with a great atmosphere, low lighting, loud and bustling restaurant.

Now, they were busy, but far from slammed so the hurried nature of our waitress was immediately identified as a potential problem. Just the standard, you have a question or two but they make it clear they have neither the time nor patience to help out–could have sworn that was in their job description? 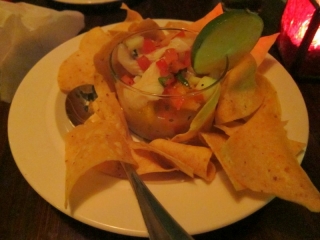 So, after asking an opinion on what’s particularly good or popular, and being told “everything is good,” we started with the CEVICHE ($12). It was a pretty standard preparation featuring “white fish” and diced tomatoes soaked in a citrus sauce. We had a bite or two on the tortilla chips and were very underwhelmed. McCown concluded that maybe it was because the chips were stale so we waited (a good while) for our server to come back and bring us more. Turns out the chips are just bad and the ceviche isn’t much better, it was just so bland and not fresh at all. General impression was “blah.” 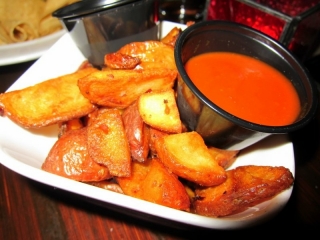 Our second tapas course was the PATATAS BRAVAS ($4), a staple in Barcelona. Barsa’s take on these was a sliced potato (think homestyle fries) with a rather spicy dry rub on them–but we asked for the spicy version so it was perfect. Overall, they were a little overcooked and a little too dry when compared to how I remember the original in Spain. Typically, they would be drizzled with a creamy ketchup style sauce, aioli might be the right word. Here it was served with two dipping sauces, a tomato sauce (tasted just like marinara sauce) and a white sauce that was lacking in flavor more than the ceviche. Again, pretty underwhelming. 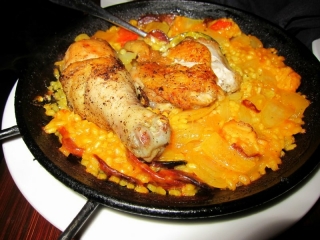 And, of course, it wouldn’t be a proper Spanish meal without sampling the CHICKEN & CHORIZO PAELLA ($15). We opted for the single portion which was more than enough for two people, especially if you start with a few tapas. All-in-all, another decent-at-best plate. A paella, paradoxically, is a hard-to-pull-off dish, given that the origin of it is what the poor farmers in Spain would just throw together with any leftovers they had from the previous week. It’s traditionally cooked outside on an open wood fire, giving it a nice smokey flavor. We didn’t see any of that going on at Barsa, and the flavor supported our suspicion. They put wayyyy too much onion in the dish, greatly overpowering the other flavors. The chorizo was lacking both in quantity and flavor as well. The one thing they got right: cooking it in a way that the edges had all of the good crispy rice that soaked in a bunch of the (onion-y) flavor. A decent attempt but again, falls short.

BOTTOM LINE: Not really worth the life-risking walk this far up King. Good, authentic atmosphere but underwhelming, not-so-authentic food. On the bright side, a few select beers are $1 after 11pm which might make it worth your while.