Published on August 5, 2012 by mccown in Uncategorized 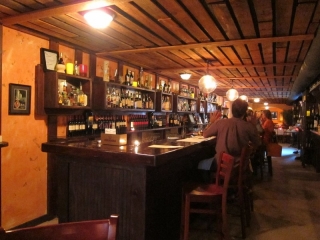 Italian food is my very favorite genre of food, so I’ve been wanting to try Osteria la Bottiglia for the past few months. We’ve recently walked by and heard live music, so we made sure to call ahead to see when the band is there. On Wednesday nights beginning at 7:30, they have live music playing in the front of the restaurant. When we arrived, we weren’t sure which of the two doors to enter from King Street, but decided on the open one– even though we had to walk straight through the band. One of the band members assured us it was the right door.

The restaurant itself is very long and narrow, with quite the European feel. One wall is exposed brick and the other is painted pink, but both have dark wood mirrors and plenty of Italian wine bottles as decoration. Coupled with the low light and wooden ceiling, you feel as though you’re almost in Italy. Even with the live band, the tables were pretty empty, and we had our choice of whether to sit in the front near the band or in a more quiet area in the back. We chose the front for the more lively atmosphere. 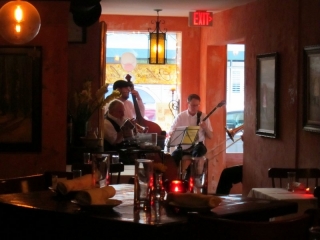 The bar is pretty prominent with its central location (separating front tables from the back), and seems to be pretty popular with who I would assume to be “regulars.” Plenty of groups and individuals were sitting at the bar enjoying a glass of red wine and the four-piece jazz ensemble.

While I enjoyed the music, Jeff spent most of his time Googling to see if we were dining next to the lead singer of some band (Aside from Jeffrey: …jury is still out, but I think it was the lead singer of The Working Title which would totally make sense since they’re from Charleston).

But unless it’s Taylor Swift, I couldn’t care less. 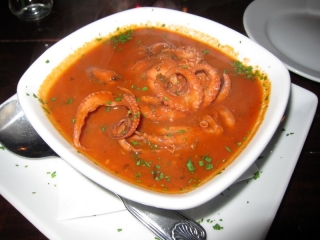 The waitress was very friendly and had a long list of specials – including seafood spaghetti, a fish of the day and a traditional Italian salad. We at first ordered the salad special as our app, but quickly changed our order to the BABY OCTOPUS ($12), one of the appetizers listed on the menu. It came out relatively quickly (a bit of a change from Italy Italian restaurants) and was piping hot. Even though the waitress made sure we liked spicy food when we ordered it, we were surprised that it wasn’t too spicy at all. The five baby octopus soaked in a tomato soup-like broth. The octopus was spongy and fishy-tasting – and pretty delicious. I’d recommend this dish if you’ve had octopus before or just like trying new things— but don’t order it if you’re a picky eater. The octopus look like what you learn about in elementary school and all eight legs are still attached. When I cut it in half to make it bite-size, I felt like I was cutting into its brain. Jeffrey said he felt like he was on the set of the movie Independence Day since they looked identical to the aliens whose asses are kicked by Will Smith. All-in-all, I’d order this dish again. It’s a fun, out-of-the-ordinary appetizer and a bit more exciting than just a regular salad we were originally going with… 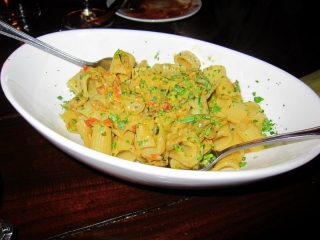 Now, for the entrees. We were having such a tough time deciding what to order than we almost asked the waitress to surprise us, but, after hearing her suggestions, we went with the LOBSTER RIGATONI IN A LEMON GARLIC SAUCE ($18) and the DUCK LEG CONFIT SERVED WITH RAVIOLI ($16.50).

The lobster dish comes with chopped asparagus and rigatoni – but I had a hard time finding the lobster. To be honest, this dish was a little bland, with little sauce and the asparagus flavor is kind of strange. It was the highest priced menu item– and we don’t think it’s worth it at all. 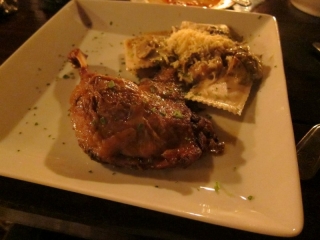 Jeff’s entree, the duck, was much, much better. The leg of duck, cooked in its own fat, arrived so tender that it was falling off the bone. Duck is probably my favorite meat, and this was better than normal. The homemade ravioli was covered with a creamy sauce and mushrooms- salty and full of flavor that paired perfectly with the rich duck. This plate deserves a 12 out of 10. When we switched plates for a bit, I almost didn’t give it back to Jeff. I’d get this 1000 times again.

The dining experience was rather tame, however, since I was expecting a more Berlusconi-esque scandalous experience.

BOTTOM LINE: If you love Italian as much as I do, be sure to stop in Osteria la Bottiglia on a Wednesday evening. The price can’t be beat and the food & atmosphere are pretty authentic. The best part: You can enjoy great Italian food without lots of Italian Stallions (i.e. guidos) staring you down. 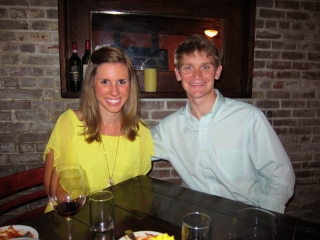 no images were found

Comments Off on Osteria la Bottiglia