Cool name, right? OK, we get it: You’re actually rather open for business and this would explain the packed front bar area and frequent occurrence of a line to get in nearly every weekend night.

I had patronized the beer-centric bar a handful of times and it had never disappointed. In my mind, this was always a great spot to go grab a beer late-night, often a time when dinner is the last thing on my mind (as all of my calories at that point in the night will be liquid). But alas, we have a blog which forces us to try the food, not just drinks so we found ourselves at Closed for Business around 9p.m. on a Thursday night. 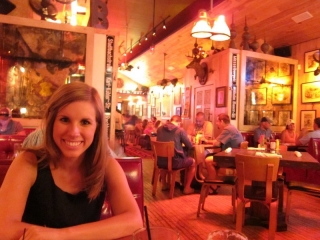 Confirming all suspicions that it’s more of a bar, the bouncer (OK, glorified ID checker who could also deck any of the NFL’s defensive line at a moment’s notice) had already posted up as of 9 p.m. Not typical of most places that consider themselves to be restaurants first, bars second.

The very low-lit bar is the centerpiece of the place with some nice, plush and cozy leather seating that is rarely available. They also have a few long tables that come right up to the window: a common trait on many of the older storefronts on King Street signaling the age of the building—pretty nice spot to post up if your goal is to watch out for your friends stumbling past late-night.

This isn’t a place where you’ll be ordering fruity cocktails —sure, they have a full bar and can maybe pull off anything you want— but on our visit, an unsuspecting girl hoping to find the house version of a “Flirtini” was laughed at when she asked for the “Cocktail Menu”—“this is a beer and bourbon place,” the sever responded. Yes, yes it is and one with quite a good selection at that. You’ll find an enormous choice of good craft beers on draft, sorted neatly on the menu by style (your LIGHT, WHITE/FRUIT, PALE, AMBER/BROWN and DARK) along with a few special drafts on rotation. I would normally say you can get a few different sizes, but only one size is pertinent to this blog: the 1 liter monster (or 33.8 oz for all you metric-hating, red-blooded Americans out there). They’ve also got a few cool “beer flights” of 4 beers for $10 and even-cooler, “bourbon flights” in the $20 range to help you get a nice little taste of all they have to offer followed shortly by a nice little buzz. 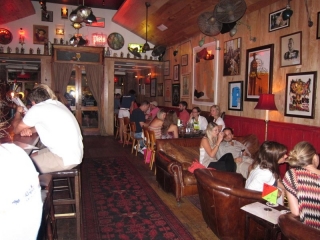 We had to fight past the always-bottlenecked bar to get to the spacious “dining room” quadrant of the joint. Everything is just seat yourself, so don’t waste your time trying to hunt down a busy server to ask what the deal is. The whole restaurant is vaulted and covered in light wood paneling, sending off a pretty rustic feeling when coupled with the red light bulbs in the many fixtures. As I scanned the room I spotted animal heads mounted just above the bathroom—these were the final touch needed to confirm that feeling you couldn’t put your finger on: the mountain lodge. It immediately brought me back to stopping in at places along the road in Bavaria for a beer and hearty meal.

I think the reason we’d never considered eating at Closed for Business in the past is that we had glanced at the menu and determined it to be not very exciting, it is all essentially just slightly upscale pub food. Like sandwiches, hotdogs, burgers etc in the $10 range—nothing too fancy here. 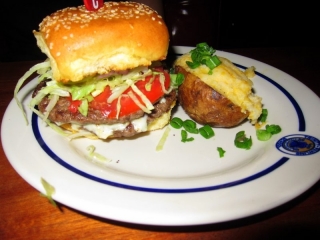 So, with nothing earning the oh-my-gosh-you’ve-got-to-try-this! status in our minds, McCown went with THE BUSINESS BURGER ($10). It ended up being a pretty good burger, although at first it was a little curious that the menu says it’s local beef, ground fresh in house and our waitress didn’t ask how she wanted it cooked (they can usually go as rare as you want when doing it all in-house). They’ve got a lengthy list of toppings that can be added for $1 a pop, which can easily make your $10 pub burger turn into a $17 monster if you’re not careful on the configuration. McCown went with just the gorgonzola cheese (my wallet appreciated it). When we got it, it made sense that they hadn’t asked how we wanted it cooked: they end up taking two thin patties and doing their best to stuff the “toppings” in the middle, leaving little room to order it at a specific temperature as it just ends up being cooked or not cooked. The burger was good, a little over-salted, but the beef tasted like a good quality (as advertised)— but, as with most places, no match for 39 Rue de Jean. 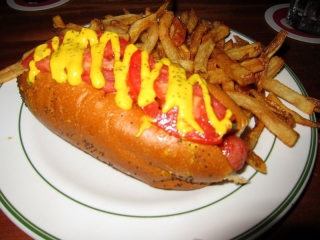 I went the route of the HOT DOG—THE CHICAGO WAY ($6). I’ll start by saying, I’m not at all shy when pretending that I know something about how a specific food should be prepared but the Chicago Dog is not one of those things. I’m not certain that I’ve ever had a proper Chicago Style dog, despite my best efforts on past visits to the Windy City. Closed for Business though, in my mind, has pulled off a pretty damn good authentic Chicago Dog. And, at $6 for 1 dog + a heaping pile of fries, it might be one of the better deals at a sit-down restaurant on the Peninsula. Here’s the list of toppings (feel free to comment and let me know if they left anything important off): yellow mustard, traditional green relish, tomato wedge, minced onion, pickle spear, sport pepper & celery salt — all on a moist poppy seed bun. It was all that I wanted and more, the super spicy sport pepper really brought it all together for me. Only complaint is that the actual wiener was a little small (that’s what she said, just never to me).

BOTTOM LINE: If you’ve never been to CFB at all, make sure to come in for their massive array of wheat-sodas and do your best to bring an appetite and sample some inexpensive but filling and delicious pub food fare—just don’t come expecting to rip sour-apple shots all night. CFB’s a little more grown up than that. 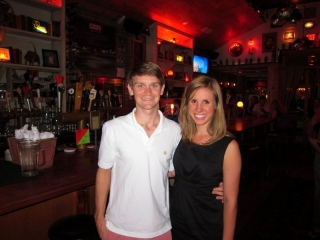