CO has just popped up in the past few weeks and the packed bar area on every walk-by had us intrigued. Interestingly, it opened up almost right across the street from Mama Kim’s new and improved location but, despite both serving Asian fare, they shouldn’t overlap as CO is a much classier experience.

The very sleekly decorated, plate-glass window looks straight through to the (rather small) bar, which is rarely in want of another thirsty patron. 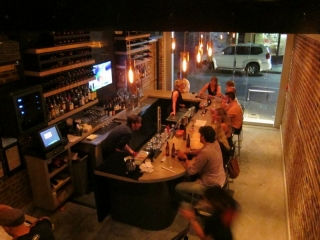 You’ll walk in and assuredly be confused: from the street, it would seem that the place is a tiny bar with enough seating for maybe 20. Upon entry, you realize there is an upstairs dining area but it wasn’t evident how to grab a table. In our two previous attempts, there was at least a 30 minute wait for a two-top, and that’s 30 minute after we actually found the hostess to get on a list (there’s no stand and she runs around at least as much as the servers, so good luck!) We had heard that most of the seating was communal tables but we requested a private table. From what we could tell, there were a few two-tops but most everything else was communal seating, which would probably make going with a group larger than two pretty difficult and time-consuming to accommodate.

The upstairs is really pretty cool; there’s a great lounge/booth area that might seat a group of 6 right when you walk up and about three long common tables lined up cafeteria-style. The large skylight let in plenty of natural light, making the dark room feel a little livelier. When we were there on a Saturday night, the restaurant was packed. It’s worth noting that we walked in and were seated immediately, while a group of three was there long before us and was seated much later than us (another reason it might be better to go as a twosome).

Our first impression from looking at the menu was how reasonably priced everything was. You’re looking at the $12 to $14 range for the noodle entrées — not bad, given the great location and atmosphere. 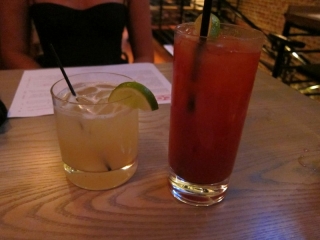 We dove on in with two of their signature cocktails: McCown tried the GUAVA MARGARITA ($8), which was good but not really noteworthy. The best drink we tried was the SRIRACHA MARY ($8), their kickass twist on a bloody mary. This thing was loaded with vodka, clamato, tomato, sriracha and hoisin. Unlike most bloodys, this one wasn’t thick at all, just a very fresh-tasting tomato juice with a modest amount of liquor and just enough sriracha to pack a great punch… leaving you wanting more and more.

Before this dining experience all I knew about the Vietnamese people and food I learned from Rambo 2, We Were Soldiers, and Deer Hunter–and those movies focused a little more on kicking Viet Cong ass than the culinary delights of the region (although Full Metal Jacket did spend some time on some of the other “regional delights”: “me love you long time”). 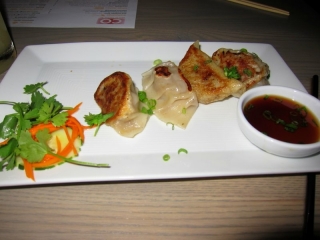 A friend recommended the PORK AND GINGER GYOZA ($5) as a starter, which ended up being a possibly homemade “potsticker,” filled with pork (and not so much ginger, if any) and wrapped in a dumpling-style dough then skillet-fried. The garnish of cilantro added a lot to the flavor, so much so that the side of soy sauce wasn’t even needed. I enjoyed it, but I’ve had the ones from Costco and these tasted nearly identical. Despite being good, I can’t say that I would get them again given that I can get a whole damn bag for about $10 bucks at the giant warehouse big-box wholesaler over in the West Trashley. 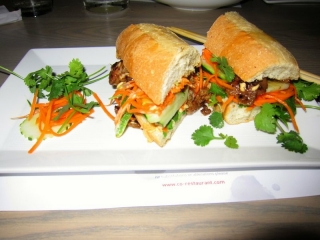 Next up was the CARAMEL PORK BANH MI ($8). If you were like us and had no clue what a BANH MI was, you’ll want to know that it’s a crispy baguette sandwich. Being colonized by the French, the Vietnamese were introduced to a few traditionally French things and the banh mi (Vietnamese term for French baguette) is one of the few that stuck. At CO, it’d be a better lunch meal, but we split one at dinner for the sake of trying it. Ours was served on a crispy baguette with cucumber, pickled carrots, jalapenos (a totally Americanized addition, as the Vietnamese don’t even have jalapenos), sriracha mayo (which is authentic) and cilantro. The pork, despite being a little sparse on the quantity when compared to the giant, crispy bread, was quite good with the thick, barbecue-like “traditional fish and sugar cane marinade.” A pretty good deal (and filling) for only $8. I’d venture to guess it’s one of the cheapest dinners on King Street. Possibly the best part of this meal was that we didn’t have a play any Russian Roulette with that creepy Christopher Walken. 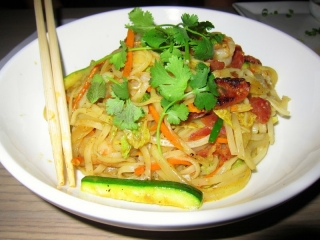 We went with the HANOI NOODLES ($14) because we asked the server what the girl at the table next to us was eating that looked so good. This rice-noodle dish comes with a spicy yellow curry, onion, carrots, zucchini slivers and your choice of shrimp+shanghai sausage or tofu. We chose the shrimp+sausage combo. You can order the dish at the spice level of your choice, 1, 2 or 3. We went with a two, but it wasn’t spicy at all. And we were surprised that there wasn’t much of a curry taste to the dish. But, other than that, it was very good — good enough to order again. Most of the flavor came from the sausage instead of the curry, but we liked it a lot. It’s a pretty big dish, so we were glad we didn’t order two noodle dishes and instead split one noodle dish and a banh mi.

All-in-all, this place was damn good and we suggest you get down to CO quicker than Sylvester Stallone’s speech-impeded voice can slur out “Banh Mi”.