The Cocktail Club Review Charleston South Carolina King Street Good Drinks Charleston
479 King
American/Pub (Happy Hour, Bar)
$
How to save some $: They have different Happy Hour specials every day of the week. Thursday was select cocktails for $6 and half-off food from 5 to 7 p.m. 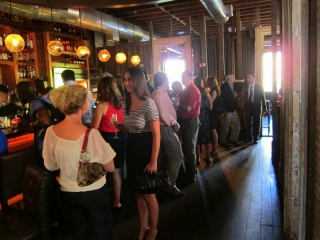 It’s pretty hard to stumble upon the Cocktail Club–you have to been looking for it, and, even then, you might overlook it. You enter through a small door just south of The Macintosh; in fact, I had passed it many times thinking it was another entrance to The Macintosh. You’ll have to climb a flight of stairs, but, when you arrive at the top, you’ll find a rustic-looking bar with wooden support beams partitioning the large area into smaller, more private rooms. Up yet another half-flight of stairs is the large backdoor patio with outdoor seating. The atmosphere may be the best part of the whole experience: the bar was full when we arrived and the dark wood set the mood that you were about to enjoy a more upscale happy hour than you would at, say, Juanita Greenberg’s. They do a great job pulling off the upscale lounge-like décor: the menus are bound in a soft leather and printed on thick paper meant to seem weathered. Most of the outdoor tables were made from old doors, a pretty cool touch.

I’ll start with the worst and try to end on a positive note. The place is called Cocktail Club… they specialize in cocktails. But, they are owned by the Indigo Restaurant Group which owns Oak Steakhouse, O-Ku (review here) and The Macintosh–all known for high-quality food. So then where does their food stack up? 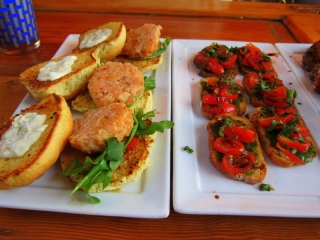 The TOMATO BRUSCHETTA ($8) was actually pretty good. It had fresh-tasting pesto and cherry tomatoes sitting on a very thin, hard cracker (almost like a rye cracker), then garnished with whole basil leafs and a fig, balsamic vinegar. After trying Joe Pasta’s bruschetta a few weeks ago, the bar was set pretty low, making Cocktail Club’s rendition taste amazing. But, under normal circumstances, it I would consider it to be about average.

Thinking it might be one of the light choices, we then sampled the SHRIMP CAKE SLIDERS ($10). It comes with three ground shrimp patties served on a (relatively) oversized brioche bun topped with “pickled cucumber, arugula aioli, and tomato,” which in theory sounds good but in practice tasted like a tartar sauce that was unmistakably similar to the McDonald’s Filet-O-Fish sauce (which we’ll be the first to review, should Ole McD’s head to King St.). The first bite was pretty good, but, if you have any more than that, you’ll realize there is wayyy too much bread for the little amount of meat you’re getting– and that they were wayyy oversalted. 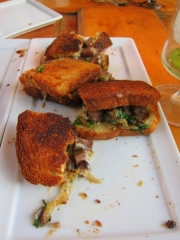 Our third and final plate was by far the funniest. It arrived looking like the spawn of Edward Scissor Hands and Helen Keller slapped it together in a very dark kitchen. The waitress apologized and said another one would be right out, blaming the “new chef” for the error (a very common and all-too-convenient excuse, we’ve found). We call BS: throw that crap away before it leaves the kitchen. We took a bite and found it to taste as good as it looked. We put that version aside, waiting for its replacement. Just as we suspected, the SLICED BEEF PANINI ($11) just isn’t good. The thick slices of brioche (or just sourdough?) bread (unlike any “panini” I’ve had) were soaked all the way through in butter, coated with a rich creamy sauce (meant to be gruyere cheese, according to the menu) and had some pieces of beef and mushrooms thrown on before being grilled. All-in-all, a bad experience. 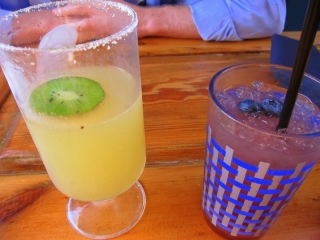 What they did well, though, was my cocktail. I went with the SAFETY WORD ($10), which is similar to a margarita. It was very unique and spicy, featuring a habanero-infused tequila, muddled kiwi, lime juice, and house made lime bitters. They topped it off with sparkling apple cider, which added an interesting sensation when drinking. Like any good margarita, it was served in a glass with a– get ready for this mouthful– “habanero lime-infused himalayan sea salted rim.” Or plain and regular salt to you or I.

McCown’s cocktail, ETERNAL YOUTH ($11) was decent, but nothing spectacular: “House infused citrus vodka, acai juice, pomegranate juice, fresh blueberries, lime with a splash of soda.” It tasted like what I imagine a cup of watered-down “sizzurp” (urban dictionary it, old guys) to taste like (which I’ve never tried because I’m neither cool enough nor a rapper).

BOTTOM LINE: Since only 1 of 5 things we tried was great (with the rest being overwhelmingly mediocre), don’t be fooled by the allure of 50% off food. Skip the meal altogether and try one of the discounted drinks during happy hour–you might only leave feeling mildly disappointed. 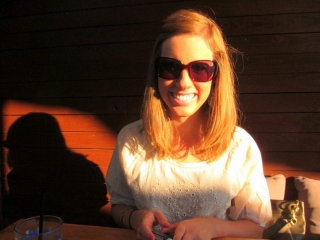 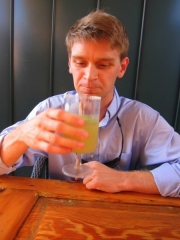